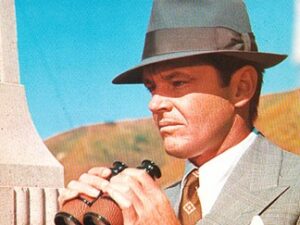 I attended an auction in Asheville, North Carolina in about 2001. The auction featured the estate of Samuel Evans of Riverside, CA, and featured many high-quality items from his iconic Arts and Crafts home. I bought 10 oak and black leather nail-head-trimmed dining chairs. There was also a set of oversized leather ledgers with marbled covers. I could see them stacked beside a club chair with a glass top on them. I spent many hours polishing the leather and looking through the ledgers. Several of them were scrapbooks of the time that Samuel Evans served as the first mayor of Riverside from 1907 – 1912 and again from 1922-1926. Another of the ledgers was an accounting of the waterworks for the county. The last entry of the newspaper scrapbook was an article reporting Evan’s indictment for fraud relating to the waterworks.

Obviously, my curiosity was aroused. Before I had time to research the fate of Samuel Evans, I received a phone call. The gentleman was given my name by Brunk Auction House and was a collector of Southern California’s ephemera and history. He had been following the fate of the estate items and somehow missed the notification of the auction. He called hoping that I would sell the items to him. My basic wish for all estate items is for them to go to their best place, hopefully back home where the items would be most appreciated. But I needed to drive a hard bargain. When I was asked if I would sell them to him, I told him that I would on two conditions: (1) That I could make a profit, and (2) that he would tell me the story.

For those of you that saw the movie Chinatown, that storyline was about town officials who diverted the water of the town to irrigate the orange groves. It was loosely based on the story of Samuel Evans, who was also given credit for bringing the citrus orchards to Southern California. He was acquitted and elected to a fifth term as mayor but died before he could be sworn in.

Some stories are stranger than fiction!